Introduction to the Debt Repayment Scheme in Singapore

In Singapore, the Debt Repayment Scheme (DRS) is an alternative to bankruptcy. It is a pre-bankruptcy procedure that aims to provide a favourable solution to the debtor and the creditors by avoiding a formal bankruptcy order.

Debt Repayment Schemes are governed by Part 15 of the Insolvency, Restructuring and Dissolution Act (IRDA) 2018 and IRDA Regulations 2020. The court has jurisdiction to refer a bankruptcy application to an Official Assignee (OA) to determine the debtor’s suitability for a Debt Repayment Scheme when specific criteria are met.

While traditional bankruptcy proceedings have many long-term negative financial and lifestyle implications for the debtor, it also comes with potential costs for creditors. Often, creditors don’t fully recover the debt owed to them when a debtor is declared bankrupt. The Debt Repayment Scheme aims to offer a better solution for all involved.

This article will discuss how and when a debt repayment scheme is an appropriate alternative to bankruptcy. It will look at the consequences of DRS, the debtor’s responsibilities, and how you come out of a DRS.

What is the Debt Repayment Scheme?

In short, the debt repayment scheme is a well-regulated plan for the debtor to repay creditors under the supervision of the Official Assignee. The debtor remains in possession of their assets, continues to engage in business transactions and build towards a stable financial future. The supervised repayment scheme ensures that creditors receive regular repayments towards the amount they are owed.

Who qualifies for a DRS?

In Singapore, a Debt Repayment Scheme is available to any debtor who:

If the debtor meets all the eligibility requirements, a court-appointed OA will assess the matter to consider if a DRS is a suitable option for all involved.

Can a debtor apply for a DRS?

No, a debtor cannot apply directly for a DRS. The DRS process is initiated when an eligible debtor or a creditor files for bankruptcy. The court may then decide to refer the matter to the OA to assess whether the debtor is suitable to enter into a DRS. Debtors can apply to have the bankruptcy proceedings adjourned for up to 6 months while the DRS application is reviewed.

If an OA finds the debtor not eligible for DRS after evaluation, the bankruptcy application will go ahead in court.

How does the DRS process work?

After either the debtor or a creditor has filed for a bankruptcy application, the debtor will attend a hearing. The case will be adjourned, and the court will appoint an OA. The OA will then begin an assessment of the debtor to determine if they are suitable for a DRS. If a debtor is eligible for DRS, the OA will require the following documents to make an assessment:

What are a debtor’s responsibilities under a DRS?

In addition to fulfilling the repayment obligations per the agreed-upon schedule, a debtor must adhere to the following:

When does the DRS come to an end?

Once all debts covered under the DRS are repaid in full in accordance with the DRS agreement, the OA will issue a Certificate of Completion. The certificate releases the debtor from all debt covered by the DRS.

What happens if the debtor fails to comply with the terms of the DRS?

What are the costs involved with Debt Repayment Schemes?

Other than fees payable at the initial application and submission of the documents, the Official Assignee will charge fees for the administration of your DRS proceedings. These fees include:

What are the long-term effects of the DRS on debtors?

A debtor’s DRS status is part of the public record. While it doesn’t have negative long-term implications in the way bankruptcy does, this may affect how future creditors conduct business with them.

What happens if the debtor misrepresented the facts?

The OA has the right to revoke the Certificate of Completion if the debtor failed to disclose debts or misrepresented facts that led to the approval of the DRS. In such a case, the OA will issue a Certificate of Failure that creditors can use to file new bankruptcy charges against the debtor.

Why is DRS better than bankruptcy?

The Debt Repayment Scheme (DRS) offers debtors a significant amount of freedom as compared to bankruptcy. DRS gives the debtor the opportunity to work their way out of debt towards a stable financial future and avoid many of the formal, long-term implications and stigma of bankruptcy. DRS preserves the debtor’s reputation and public image.

Similarly, Debt Repayment Schemes come with benefits for the creditors. While bankruptcy proceedings can be costly for the creditors, DRS is far less expensive. Debt repayment may take longer to conclude, but the proceedings work towards creditors receiving the total amount owed to them. In many bankruptcy cases, full repayment is simply not possible as the assets owned by the debtor do not cover the total debt amount.

To conclude, a Debt Repayment Scheme is a very useful option when you find yourself in a situation where you struggle to repay your debts. A DRS allows you to pay off your debts that you can afford whilst avoiding the restrictions that come with the legal status of bankruptcy.

If you want to find out about the Debt Repayment Scheme, you should consult with a lawyer who specialises in bankruptcy and insolvency. You should understand the law and the consequences before making any decisions affecting your financial future. 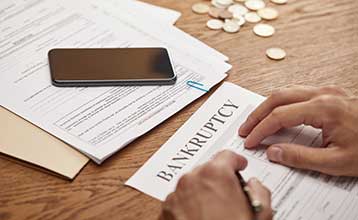 What is bankruptcy in Singapore? Bankruptcy might be the first thing you think of when you realize that you can’t keep up with your bills and debts. It might even be the right...

What is bankruptcy in Singapore? Bankruptcy might be the first thing you think of when you realize that you can’t keep up with your bills and debts. It might even be the right...